Flash Party is a fresh and original approach to fighting game in which battles will take place in small arenas floating right in the air. It is enough to decide on a futuristic hero with special battle skills and go straight into battle to knock out all the crap from any enemy.
Download APK
0/5 No votes
Report
Updated
2022-02-17Size
128 MBVersion
0.9.1.47726Requirements
Android 5.1.1+Get it on

Lay the smackdown on your opponents in a variety of multi-platform arenas by knocking them off the stage and into the stratosphere. Dominate in various game modes that include 1v1, 2v2, Brawl, Arena and Soccer Showdown, each with their own victory conditions.

Unlock rewards like rare costumes, KO effects, as well as coins you can use to redeem items. Level up your heroes and increase your player proficiency the more you play! 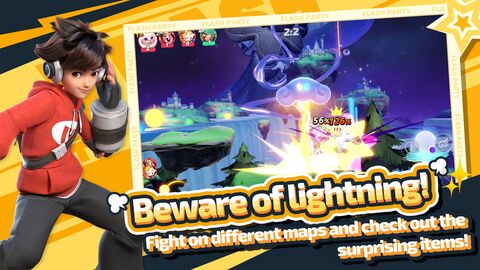 KNOCK OUT OPPONENTS TO WIN

Just like traditional platform fighting games, your goal in Flash Party is to KO your opponents – by knocking them off stage and sending them beyond the stage’s boundaries! Featuring a platform stage (and sometimes with additional ledges), your hero will have a value that increases every time it gets hit. The higher the value, the more likely you’ll be knocked off the stage. Victory conditions vary depending on the chosen game mode: 1v1, 2v2, Brawl, Arena, and Soccer Showdown. 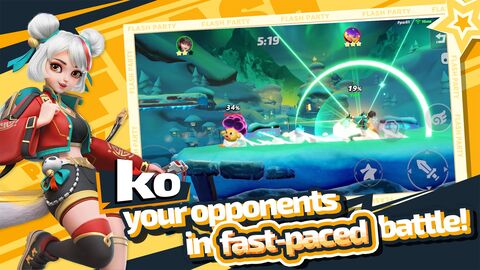 Choose from a wide range of heroes, including melee fighters, ranged archers, and casters that utilize traps. Find the one that suits your own playstyle and master their distinct fighting arts as you breeze through battles with epic combos! Unlock special skills unique to each hero and use ’em to your advantage in battle. 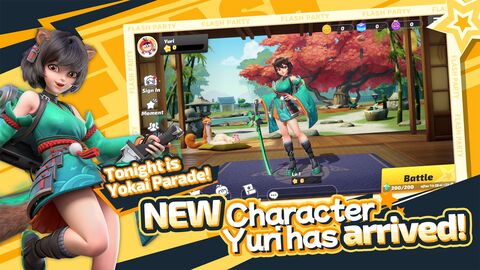 Choose from a variety of maps, all of which are designed to illustrate our heroes’ hometowns. Current maps include Sivi’s Studio, Olympus, Center School, Macalon Paradise, and Jotunheim, and each one has varying quirks corresponding to different game modes and special events. The maps, levels, rules, and mechanisms are changed on a rotational basis, bringing you a unique game experience every day.

Dress up your heroes in adorable costumes, change up your KO effects and respawn pods. Rock the stage with fancy looks and jaw-droppin’ combat!

MEET AND PLAY WITH FRIENDS 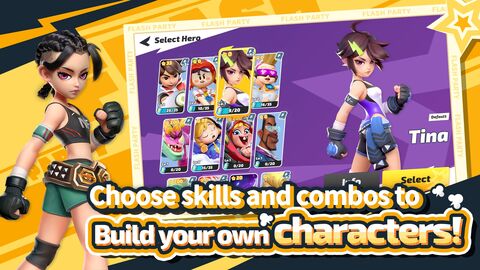 Met some players you enjoy sparring with and want to befriend them? Add ’em as friends using the in-game Friends system. Think you can easily surpass their scores? Challenge them to a friendly battle with a simple tap of a button! What’s a platform fighting game without a lil’ friendly competition now and then?

Set up custom rooms for Friendly Battles, or Quick Join public battles to fight or even just to spectate matches. Tailor the battle according to your needs, be it for practice, a casual tournament, or a quick get-together with your friends.