“Yu-Gi-Oh!” is available on-the-go as a mobile app!

Become the best Duelist in the world!
Anywhere, anytime! Prepare yourself for some sweet Duels!

[ABOUT “Yu-Gi-Oh! Duel Links“]
‘-Easy to learn rules and simple controls for beginners!
‘-Don’t worry if you are not sure how to use your cards. The game will indicate when you can activate your cards!
‘-Among 3 million players who have participated in the past World Championships, even Duelists with only 3-6 months of Duel Links experience have also became a champion.
Duel online and aim for the top of “Yu-Gi-Oh! Duel Links”!

In addition, You can also get the Egyptian God Cards “Slifer the Sky Dragon” and “Obelisk the Tormentor” from the in-game event! 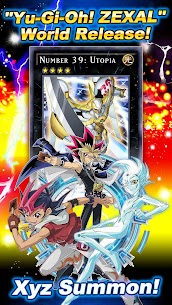